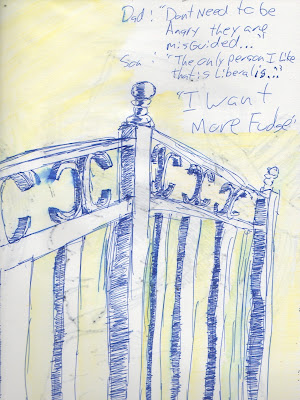 None the less, I happen upon gems like the one above from outside a chocolate store back in the Lake of the Ozarks. A father and his husky seven-year-old son rounded a corner in an odd conversation. His father was obviously trying to quell his son's angry prejudice and teach him the values he himself lived by. But it was no use, it was, and always will be, fudge that wins the attention and admiration of a fat child.
Posted by Dave Maupin at 2:00 PM 0 comments 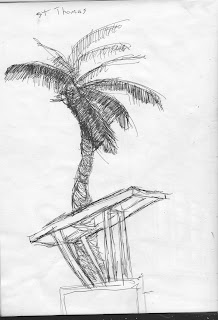 Another Sketch from the beach of St. Thomas. I'm still chewing on the pen cap. Jen was not amused.
Posted by Dave Maupin at 2:00 PM 0 comments 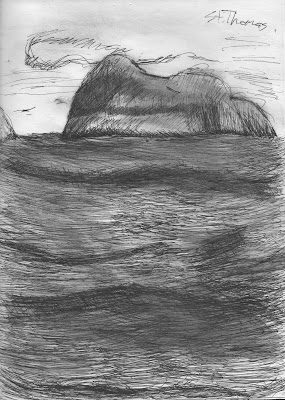 Sketch from the beach of St. Thomas. For some reason I enjoy tedious hatching. I also learned that my wife doesn't like it when I put the pen cap in my mouth for fear of me inhaling it.
Posted by Dave Maupin at 2:00 PM 0 comments

Sketches from Abroad Part One 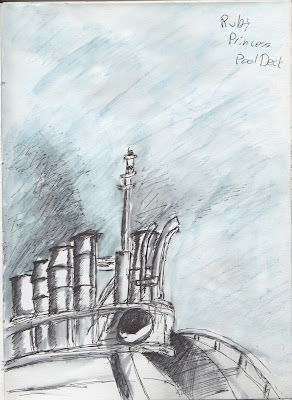 Drawing from my cruise to the Caribbean. This drawing of the engines smokestacks was drawn poolside facing aft.
Posted by Dave Maupin at 2:00 PM 0 comments 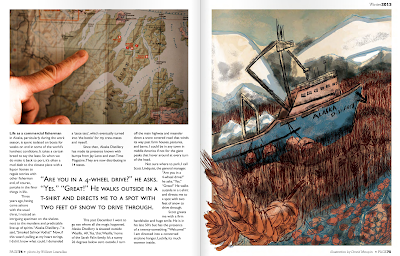 A buddy of mine, Alex Vitti, recently starting working for MicroShiner as Design Director. MicroShiner is a small digital publication based out of Montana that covers micro distilleries all over. Besides having a great layout, it is full of fantastic photography, and very intriguing articles about the distilling industry. One of which I was delighted to illustrate for.

The article featured Alaska Distillery whose ingredients and the method in which they get them are second to none. Instead of summarizing it, you should check it out for your self.

Below you can see the direction I headed from thumbnail, to sketch, into final art. As Art Director, Alex really brought my work up several notches. 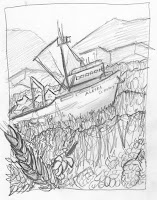 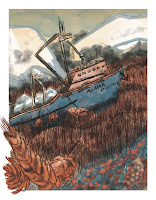