For some odd reason it surprise people that I am a soccer fan. More over that I follow the English Premier League (CHELSEA FC!!!!!). I find it quite interesting that a lot of the same people who claim soccer is boring, also like to inform others that drawing talent is genetically ingrained into you at birth. Long, boring story short, I steered away from each activity as a child due to many other ill-advised opinions. The idea that someone who is ignorant to a subject matter is blindly spewing their thoughts to others, genuinely anger me beyond belief. It is a shame that I let such word vomit affect me until my later teens.

Bouncing off of that revelation, I have started on another illustration project geared towards Children's Books.The process has, oddly enough, married both my enjoyment for soccer and my love of drawing. 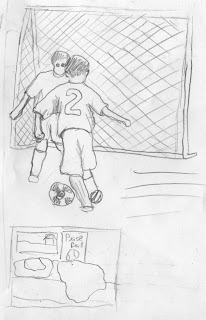 This is actually a compositional drawing that has temporally been placed on the chopping block, but only to be whisked into another direction. I enjoy the idea of drawing what children actually do in order to garner attention to a story.
More to come
Posted by Dave Maupin at 9:15 AM