In order to escape the crowds, I went to an area were the majority of the people don't care to go, the Liberty Bell Ferry. This "ride" is much like the train that takes you across the park being a steam powered vessel with vintage dialog blasting through its speakers. Unlike the convient train that stops in many parts of the park, there is no reason to ride this boat. Generally, I tend to avoid pointless transportation that takes you back to where you left not 15 minutes ago, but this time I made an exception. 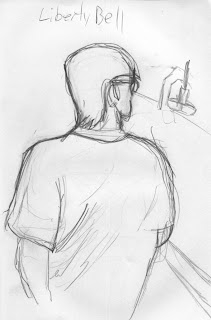 On board, I found a middle aged father of 2 young children acting way too relaxed for the likes of Disney's Magical Kingdom. I was amazed that he hardly moved while facing Tom Sawyer's Island, so in the last 3 minutes of the ride I felt obligated to capture him leaning against the railing. If I were to take this quick sketch and finish it more, I would probably fix his the disproportionate anatomy. But knowing me, I will probably never do that.
Posted by Dave Maupin at 9:15 AM