Just got back from Disney World in Florida. Had tremendous amounts of fun, but still managed to get in a few sketches. My first chance to sketch was during lunch with a napkin and a crayon, but I pitched it... However,  the next day I returned, and continued with my 15 minute drawing studies. Again, I am looking to capture as much information about an object as I can within 15 minutes. Doing this as a kind of gestural drawing is kind of a warm up, but it's function is to get the important information down for later observation. 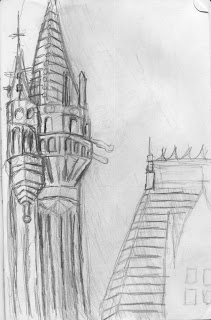 Stationary objects like Cinderella's Castle make it easy to draw since, you know, they don't move. But with the Saturday crowd in the Magic Kingdom being unrelentingly rude, I picked the top of the castle in order to actually get a view to work with. On that note, If you see someone drawing quietly on a bench, it is just polite to not to stand directly in front of them to have a phone conversation. It's like walking right into the frame of a camera's view just as someone is taking a picture. Any who, I noticed that I spend a lot of time using a harder pencil in order to get darker value. In the future I will experiment with softer mediums in order to conserve time.
Posted by Dave Maupin at 4:36 PM